Whilst his country was busy dealing with events both across the waters and indeed at home, PM David Cameron was having a ‘fun’ break with his wife Samantha in Portugal. But this was cut short as he was needed in order to chair the COBRA (Cabinet Office Briefing Room) emergency committee on the crisis in Iraq.

It might have also been to do with the fact that former Foreign Office minister, Baroness Warsi, registered her discontent on the government’s policy on Gaza. Added pressure eh, Dave?

Mr and Mrs Cameron on holiday in Portugal at a fish market.

What is the current crisis in Iraq? The crisis erupted as a result of the seizure of Mosul by the Islamic State in Iraq and the Levant and their rapid move south towards Baghdad, consequently throwing Iraq into another post-regime change crisis. MPs from across the three main parties, including a substantial number of Tories, have also urged David Cameron to recall parliament from recess to allow the Commons to debate Britain’s involvement in any escalation of Western intervention. This has still not occurred.

In an attempt to help those who have become entrapped within the conflict, including the trapped Yazidis, Britain is to transport military equipment  to resupply Kurdish forces which have been out-gunned by IS (Islamic State). Chinook helicopters are  also to be sent to the region to increase the options to ease the plight of the tens of thousands of trapped Yazidis.

However, despite the humanitarian efforts, Cameron has insisted the UK will not intervene militarily. This counters the increasing calls from experienced commanders and several Tory MPs. Former defence secretary, Liam Fox, has supported the use of the military to protect civilians from the “barbaric” jihadists and attacked  the “catastrophic complacency” of Western politicians over the humanitarian crisis.

On the other hand, Labour MP Graham Allen hit out at those calling for UK air strikes. “Many MPs who voted for the Iraq war, started this blood-letting and the creation of Isis, have learnt nothing and bay for yet more violence”

Could this be a repeat of Blair’s government? Well with Cameron resisting military intervention, it looks like he’s trying to avoid history repeating itself. Some might say rightly so.

I’ve also seen some comments in which people have argued for limited intervention from both Britain and the United States but how long can we ignore our international neighbours?

“”The Government should be working actively with our allies to now step up the humanitarian response to the unfolding tragedy on Mount Sinjar. That should include looking at how the United Kingdom can contribute most effectively.”

Either way, it looks like no one wants a repeat of the Iraq crisis during Blair’s government.

Hopefully Dave’s not too sad about his holiday being cut short. On the plus side, his tan looks erm, great!? 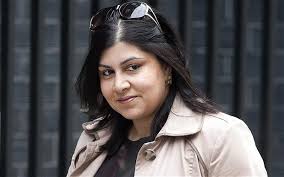 In her resignation letter to the prime minister, Warsi stated Britain’s support for the Israeli military action against innocent Palestinians which has resulted in many deaths is “morally indefensible, is not in Britain’s national interest and will have a long term detrimental impact on our reputation”. This resignation makes Baroness Warsi the first minister to resign ‘on principle‘ since the formation of the coalition government in 2010.

But why resign? In her letter, she comments “I must be able to live with myself for the decisions I took or the decisions I supported. By staying in government at this time I do not feel that I can be sure of that.” Her decision to resign has been supported by Labour and other backbench Conservative MPs who have called on Mr Cameron to review government policy on Gaza as well as Britain’s relationship with Israel. However, this is quite tricky for the party as a whole as they have traditionally always had close ties with the Israeli government. Methinks it’s safe to say it’s looking like a catch 22 situation – this is what happens when you have pragmatism and tradition as your core principles *sigh*

The Tory peer’s reasons for handing in her resignation also stems from wanting those responsible for the war crimes to be held to account but believes the UK government would not support this process. In an interview with Huffpost UK, she said ” As the minister for the International Criminal Court (ICC), I’ve spent the last two and a half years helping to promote, support and fund the ICC. I felt I could not reconcile this with our continued pressure on the Palestinian leadership not to turn to the ICC to seek justice.”

Boris Johnson supported (somewhat supported anyway) Baroness Warsi’s resignation, stating on his LBC show that he had “great respect” for her and hoped she would be back soon. However, fellow colleague, George Osborne has deemed the resignation as a  “disappointing and frankly unnecessary decision”  It looks like there are divides within the Tory party over the situation in Gaza, but we saw that coming didn’t we?

So what now for the Baroness? Well, there’s no doubt she has achieved much in her career, namely being the first female Muslim cabinet minister. In this respect, it is sad to see her go, but on the plus side, she’ll now have the freedom to speak on the issue of Gaza and her first mission is to encourage the government to stop exporting arms to Israel.

“It appals me that the British government continues to allow the sale of weapons to a country, Israel, that has killed almost 2,000 people, including hundreds of kids, in the past four weeks alone. The arms exports to Israel must stop.”

Despite voicing out many times on the conflict in the Middle East, here’s hoping that her distance from the cabinet might knock Mr Cameron into realisation. Whilst on holiday. Living it up in Portugal.

Out with the old, in with the new. New Education Secretary Nicky Morgan (left) and Michael Gove (right)

With the approval of female bishops to Cameron’s appointment of more women in his cabinet, it’s fair to say that it’s been a week of celebration for us women. But has it really? I mean yes, Cameron has gotten rid of the likes of Michael Gove (hurray!) to appoint women such as Esther McVey and Nicky Morgan, but do they REALLY represent the average British woman? Take myself, a young black female Londoner educated my whole life in state institutions compared to our new Education Secretary who was educated in fee-paying schools such as Surbiton High School. Before you all start saying it shouldn’t matter, it clearly does – not just to me but to many Britons out there. Why? Representation that’s why. How can we expect to be represented by a ‘legitimate’ government if it’s core ministers do not reflect our growing multicultural society?

Fact: Baroness Warsi is the only ethnic member in Cameron’s cabinet. Makes you think doesn’t it?

Other conservative MPs have failed to support Cameron’s #reshuffle – centrists have unhappiness about the removal of Ken Clarke as minister without portfolio whilst those more on the right have shown backlash against the demotion of, you guessed it, Mr Gove. During his post as Education Secretary, Michael Gove had many disputes with the NUT so of course his demotion was celebrated. It does pose the question: What next for the world of education? Will the radical policies continue or will Nicky Morgan be a tad bit sympathetic? You know, being a mother and all.

In response to his reshuffle, Mr Cameron stated “This #reshuffle is about putting in place a team that continues to deliver the long term economic plan & ensures a brighter future for all.” What happened to the initial purpose of “reflecting modern Britain” eh Dave?

But, is it all a decoy? William Hague, replaced by Philip Hammond as Foreign Secretary, decided to stand down as an MP in the next election. Quite a coincidence after the revelation that Hague stifled a 1996 paedophile report which may have potentially unearthed evidence of key figures who had abused children. In resigning as an MP, is Hague failing to take responsibility and instead hide behind his own faults? Nevertheless, it might seem there’s more to this reshuffle that meets the eye.

Deliver a long term economic plan? More like brush everything under the carpet and carry on with a shady government, but hey, let’s not be too biased about this.